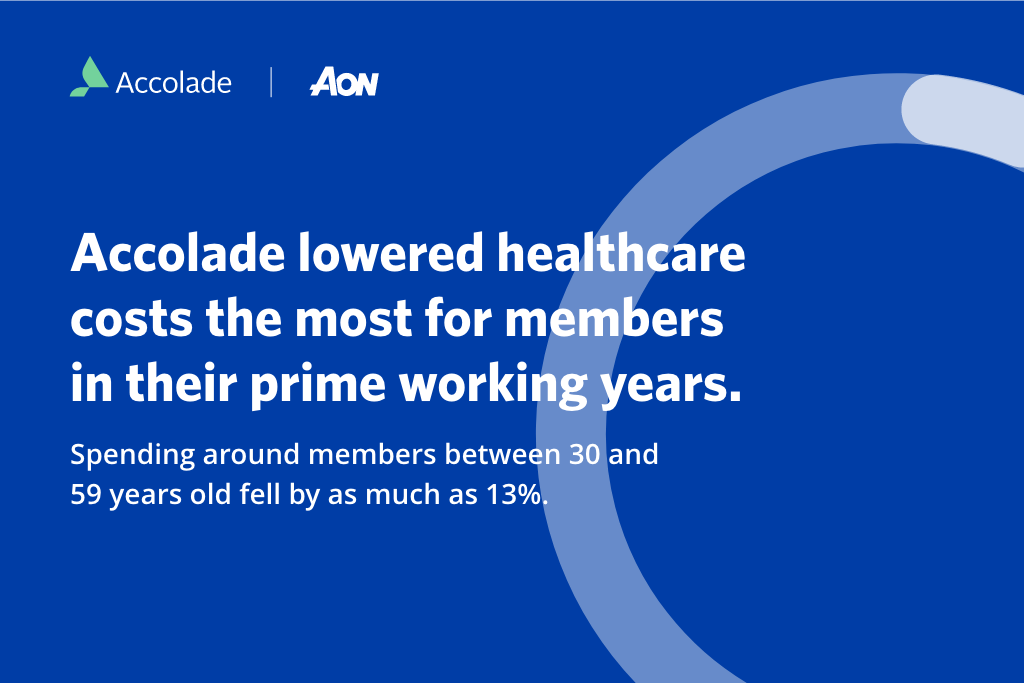 When you’re looking to contain rising healthcare costs for your team, it makes sense to start with the people who make up your team. For most organizations, the largest sector of the employee population consists of folks between the ages of 30 and 59. For U.S. employers, the median age for their workforce tends to be just about in the middle of that range, at around 42 years of age according to the Bureau of Labor Statistics .

And it’s this age range where Accolade’s solutions are most effective in containing healthcare costs. According to a study by the independent analysts at Aon, companies that implemented Accolade in 2019 saved between 8 and 13% on healthcare costs for employees aged between 30 and 59 when compared to a matched control group.

Aon’s findings come from dissecting member health spending for Accolade customers in both the year before they started using Accolade’s services and the first year (in some cases two) after implementation. And members weren’t compared to just any other company. Instead, they were held up against a control group made up of demographically matched individuals, including age, conditions, comorbidities, geography, and other factors.

For employees aged 45 to 59, the results are even more significant. Pre-Accolade, costs were significantly higher for the 45-59 cohort, with companies spending 9% more than the anonymized control. With Accolade, there was a 13% decrease in costs compared to the control group.

Even more strikingly, Accolade accomplished these savings by reversing per employee per year costs. For employees between 30 and 44 years old, healthcare costs for the control group rose from $5,741 per employee, per year in the first year of the study to $6,101 in the second year – an annual rise of 6.3%.

Accolade customers numbers looked much the same initially, spending an average of $5,732 on healthcare for each employee in this age bracket. After just a year with Accolade’s frontline care team helping their team navigate the healthcare system and find the right care when they needed it, they wound up sending even less on healthcare for 30- to 44-year-olds than they had the year before – just $5,602 per employee per year, resulting in a negative trend of 2.3%

Accolade customers saw even more marked improvements on healthcare spending for their employees aged 45 to 59. In the year before they implemented Accolade, customers spent $8,197 per year on healthcare for each employee in that age bracket – well more than the $7,521 spent annually on members in the control group. But after a year with Accolade’s services in place, the trend was reversed – while members in the control group spent $8,357 on each employee in this age range, members with access to Accolade incurred just $7,966 in annual spending. That not only less than their control counterparts, but also less than they had spent the year before resulting in a negative trend of 2.8%.

To learn more about the results Accolade demonstrated in Aon’s analysis – and how we can help your team achieve similar results - download the full report by filling out the form below!